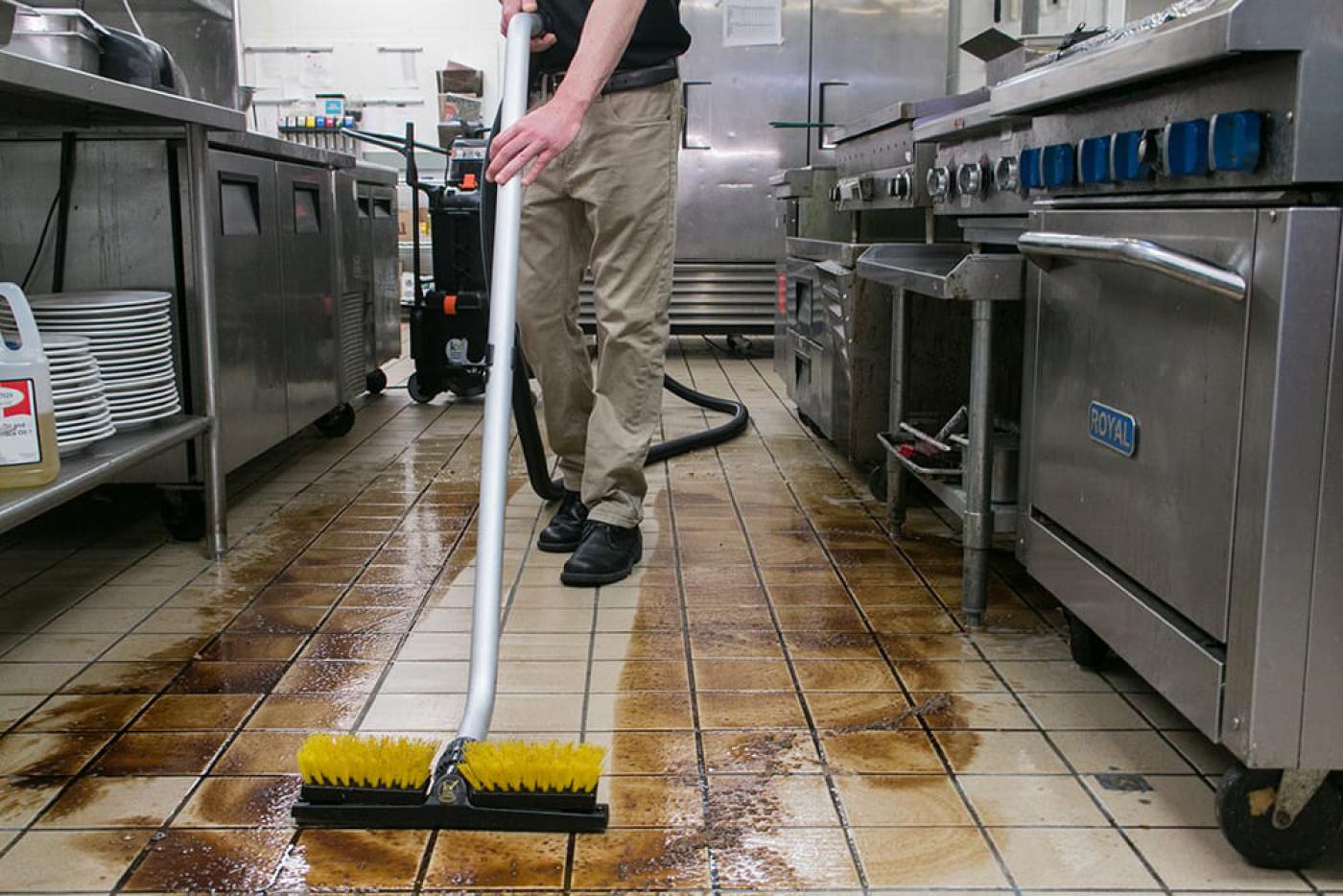 Cleaning greasy restaurant floors is hard. Traditional mop and bucket systems just can’t cut through tough grease. Even worse mops tend to spread the stuff around, introducing a slippery mess into every part of your establishment. This increases the chances of a slip-and-fall accident, prematurely ages your floor and hurts the bottom line. Expensive professional cleaning services used to be the only choice for restaurant operators.

Now, there is a better way. Kaivac’s OmniFlex™ Dispense-and-Vac used with KaiPow™ degreaser gets rid of grease and saves time and money.

Why Grease is Such Beast

Greasy soils start in the kitchen with microscopic grease particles suspended in the air around the grill and deep fryer. These droplets eventually settle on everything: equipment hoods, walls and especially floors. There they accumulate into a hard, greasy layer impossible to penetrate with regular cleaning methods and chemicals.

Traditional mops and buckets can’t cut through the grease but they can spread it around the rest or your facility. Grease tends to stick on mop heads to be redeposited elsewhere. Scrubbing only helps push the oily mess further out.

Only a powerful degreaser used with a system that fully removes soil can beat the grease.

The Costs of Doing it Wrong

Not fully removing greasy build up comes with a cost. Greasy floors are slippery floors that even the most efficient anti-slip shoes can’t overcome. Slip and fall accidents account for over one million hospital emergency room visits and are the leading cause of worker’s compensation claims, according to the National Floor Safety Institute.

Unremoved grease eventually makes its way to the front of the house. Tracked in by shoes or brought in with a greasy mop, the mess sits, attracting more dirt while hardening into a difficult mess.

For many restaurant owners, removing this mess grease and dirt means employing professional cleaning crews. Some owners contract for a few deep cleans a year. Other need a weekly clean. Either way, the costs add up quickly.

Easy Fix is The Best

There is a better way. Kaivac’s OmniFlex™ Dispense-and-Vac removes the heaviest soils and greasiest messes 60 times better than mopping alone. Perfect for food service establishments, the technology is easy to use, fast and removes dirt and soils completely, leaving floors dry and ready to use.

Coupled with KaiPow™ degreaser oils, greases, fats and soils don’t stand a chance. And unlike other degreasing chemical, properly diluted KaiPow™ is easy to dispose of once the job is done. Just pour it down the drain.

On the Menu: Rave Reviews!

Greasy messes were causing problems throughout Jake Hibbett’s Buffalo Wings & Rings franchise in Greendale, IN. Employees were using the same mop to clean the kitchen and the front of the house, staining the wood-look tile floors. The result was a greasy mess throughout the 6000-square-foot facility that no tool or chemical could fix.

A OmniFlex™ demo changed everything starting with the cream-colored tiles in the front of the house. ‘We always thought that it was black grout between the tiles,’ recalls Hibbert. The KaiVac representative put down the cleaning solution, let it dwell and surprise, the grout turned out to be white. ‘That blew us away!’ Hibbert was also impressed with the machines speed and ease of use.

Steve Howard owns and operates three sandwich operations in Louisville, KY. Cleaning was part of the employees’ job description and Howard gave them what he thought was the best option, a mop and bucket. No matter how hard employees worked, or how many times Howard bought new mop heads, the floors were coated with a greasy film. He ended up paying for twice-yearly deep cleanings for all of his locations.

One trial cleaning with the OmniFlex™ changed his approach. ‘After one use, I absolutely noticed a difference in the cleanliness and slip resistance of the floor. The film was gone,’ he says. He purchased a system for each location and plans to cancel his deep cleans. Savings from the first year alone could be in the thousands.

Bigger savings came to Randy Hughes, kitchen manager at Quaker Steak & Lube in Florence, KY. He was spending $1000 a week for professional kitchen cleaning. But the OmniFlex™ did a better, faster job and his kitchen staff liked using it. Now he gives a $300 bonus to employees that volunteer to clean and still saves $700 a week. An inspector even complimented Hughes on the cleanliness of his floors.

Amy Milshtein
Amy Milshtein covers design, facility management and business topics for a variety of trade publications and consumer magazines. Her work has won several awards, most recently a regional silver Azbee Award of Excellence.She lives in Portland, OR with her family and Clyde, a 15-lb tabby cat. Once an avid hiker, these days she finds herself on the less-challenging -but-still-exciting 'creaky knees' trails.